Edit
watch 01:36
We're Getting Mutants in the MCU - The Loop
Do you like this video?
Play Sound

Gor-Gor is a T-Rex who has made numerous appearances, as both a friend and a foe.

Gor-Gor was originally found by slaves as an unhatched egg, frozen in the ice underneath the fortress of GWAR. Slymenstra attempted to nurture the egg; however, this failed as the slaves were determined to inject it with crack and several growth formulas. Soon afterward, Gor-Gor burst forth from the egg, bit off a slave's hand, and escaped.

Gor-Gor eventually returned to attack a city, until he was destroyed by the band after he betrayed them; Oderus deftly felled him by stabbing his sword through the dinosaur's top jaw.

Gor-Gor would later reappear once again when Techno Destructo resurrected him using mechanical parts, turning him into Gor Borg. Using his newfound "weapon" would ultimately fail however, when Slymenstra, stealing the remote used to control the beast, turned him on Techno. The band would then kill Gor-Gor again.

Next, the band would revive him for the final battle against Techno Destructo, then kill him again.

Finally, the band would eventually encounter Gor-Gor once more in Hell, and, of course, kill him again.

Most recently, he would appear on stage and help the band defeat Mr. Perfect, and be killed afterward.

Gor-Gor's original appearance in the comics. 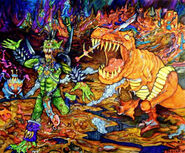 Gor-Gor chasing Oderus during their encounter in Hell. 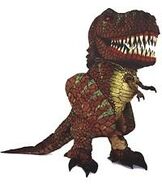 Gor-Gor as he appears in the music video for his song.

Gor-Gor as he appears in the music video for "Immortal Corruptor".