Let There Be GWAR

Joey Slutman was the second vocalist of GWAR.

Joey Slutman is notable for his vocal style; his gravelly voice was used as a parody for "Cookie Monster" vocals used in heavier underground metal bands in the 80's. Joe Annaruma, who played Joey Slutman from 1985 to 1986 took over from Johnny Slutman who had left the band in 1985.

According to Dave Brockie, Johnny Slutman apparently had a breakdown in the middle of performing, removing his costume and running out of the club and down the street. Brockie was the only member who knew all the band's lyrics, so he took over for the night. From then on, he would be the primary vocalist for the band. No one knows what happened to Slutman himself, though Oderus said that he was disintegrated. 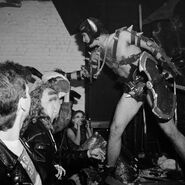 Slutman in 1985.
Community content is available under CC-BY-SA unless otherwise noted.
Advertisement