Edit
watch 01:36
We're Getting Mutants in the MCU - The Loop
Do you like this video?
Play Sound

The self-appointed leader of GWAR, Oderus is an intergalactic barbarian played by Dave Brockie.

When Oderus was born, he was promptly given a sword and thrust into an arena with rape-hungry attackers--he was ordered to kill them or die.

Oderus originally joined the legion under General Zog and quickly rose through the ranks, being tasked with leading a crew to destroy Flab Quarv 6, but we all know how that turned out.

Oderus is never without his trusty sword, Unt Lick, or his special "member"--the Cuttlefish of Cthulhu, which was once stolen by the Morality Squad.

When the band first appeared, Oderus was a very normal-looking character wearing a helmet that had spikes that appeared to be made out of tin foil, soon moving on to donning a rubber wig. It wasn't until the late 1980's that Brockie and Chuck Varga designed the demonic Oderus that is known today. After Hell-O! Brockie added the famous helmet-like shoulder pads, and in 1994, briefly gave Oderus a tentacle for an arm. In 2001 he changed the helmets to appear as skulls, and lengthened the blades protruding from them. His face has changed continuously over the years; it has become more fleshy and detailed, while his beard has become fuller. For the release of Beyond Hell Oderus added colored portions to the beard and in 2009 for the release of Lust in Space, his cheekbones were made to be more sharp and his horns made longer.

Oderus Urungus was played by Dave Brockie, and has been the longest-standing character in GWAR's history--he (and Dave) have been with the band since its genesis. He originally started on guitar, then moved to bass, then finally stayed on vocals. His guitar skills were reportedly poor. 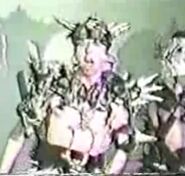 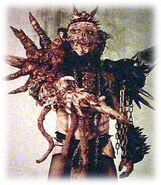 2009
Community content is available under CC-BY-SA unless otherwise noted.
Advertisement