The World Maggot is an entity born within the bowels of the planet.

Learning of the World Maggot and knowing of it as a way to finally escape the planet, GWAR holds a telethon in an effort to lure humans into being sacrificed, in order to summon the beast. The telethon goes well, but GWAR is distracted by Skulhedface and ultimately miss their trip off the planet. Again.

GWAR would often bring the World Maggot out during their 1994 tour, and feed fans to it--that is, until it would revolt and try to eat the band members. Then they would do what they do best: destroy it. 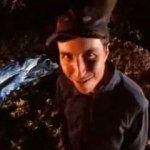